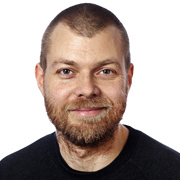 I am an associate professor at the center for Tracking and Society at Department of Communication.

I regularly teach courses in communication theory, research design, and empirical methodologies, including workshops on data analysis and data visualization. Way back in time I have also taught courses in film theory. Most of my teaching is at the Cognition & Communication programme, but I also teach at the Film and Media studies programme at times.

My primary research interests are digital media, cognitive theory, computer and video games, interactivity and gaming culture, audiovisual communication and narratology, communication theory, research methodology, and genre theory. I also have an interest in qualitative and quantitative methods and visualization. I primarily work in R, with a preference for tidyverse syntax.

I am currently working on a set of loosely connected empirical studies of social media. Jacob Ørmen and I did a large-scale (“big-ish data”) study of YouTube channels and their productivity which is out in Information, Communication, and Society. We are also working on a few other publications on YouTube, looking into platform dependence and commodification across the platform. Jacob and I are currently researching everyday economic action and investment idioculture(s), where the empirical material comes from a small set of subreddits.

A connected set of my (older) publications focus on video games, cognition, and genre theory. You can track a reasonably consistent framework through this set of publications; the framework connects a model of game interactivity and gamer embodiment to questions of genre. Aspects were laid out in my PhD dissertation, in the chapter by Torben Grodal and me on Embodiment and Interface published in “The Video Game Theory Reader 2” (2009), in my article on motion gaming and genre in the journal Mediekultur (2011), my article on cognition, generic structures and experiences in video games in Philosophy and Technology (2013), and my chapter on core cognition and video games in the anthology "Cognitive Media Theory" on Routledge (2014). I also have a chapter in the anthology "Video Games and the Mind" (2016), which looks at why it feels so meaningful to hit things (in games), and a chapter in the anthology "Screening Characters" (2019) on why (and how) I think it makes sense to talk about identification with video game avatars. For a (slightly dated but still relevant) statement of why cognition is an important topic for video game scholars, see my contribution to The Routledge Companion to Video Game Studies.

I often collaborate with Anne Mette Thorhauge on studying digital games, and this work is more oriented towards empirical social science. Anne Mette was the principal investigator on a study of problematic gaming behaviour in Denmark supported by the Danish Council for Independent Research: Social Sciences. The primary output was an edited book on problem gaming, available for free in its entirety here: http://www.nordicom.gu.se/en/publikationer/whats-problem-problem-gaming As part of this project, we also published an article in New Media & Society (2019), which de-emphasises problem gaming and instead describes how gaming practices are integrated in everyday life.

I also sometimes do research on "older" media, like television or film. An article in Poetics (2017) reports a study where we investigated emotional responses to television fiction using skin conductance measurements. This work was conducted in collaboration with Birger Langkjær and researchers from the Danish Broadcasting Corporation (DR). Together with Birger Langkjær and several researchers from Lund we did a study on Match-on-Action editing, which was recently published.

A final word of caution for students (and others) seeking advice: I love talking about research methods and the various issues involved, but please don't expect short answers from me.