Journalists can bypass censorship with social media and ‘soft’ journalism

Vietnamese and Singaporean journalists do not enjoy the same freedoms as their Western colleagues, but that does not mean that they cannot practice critical journalism: By reporting on stories that the general public express concern about on social media as well as ‘soft’ human-interest stories, journalists can indirectly address problems in society and put pressure on the authorities, new research from the University of Copenhagen shows.

Freedom of speech and press freedom are cornerstones of open societies in which journalists and citizens are allowed to scrutinise those in power. In the West, these freedoms are the norm, and this often prompts Western politicians and journalists to demand that journalists who are subjected to censorship be granted the same rights as their Western colleagues. And the sooner the better. 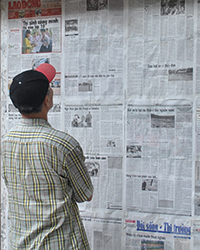 But according to journalism researcher Emilie Tinne Lehmann-Jacobsen, who has written a PhD thesis about the working conditions of journalists in Vietnam and Singapore, this is not necessarily the best way to assist these journalists.

“All the journalists I have spoken to in Vietnam and Singapore know the principles of critical journalism, but they also know that they have work under very different conditions compared to their Western colleagues. They cannot challenge the authorities in a similar manner. They simply do not have that mandate. They need to be creative when scrutinising the authorities and find alternative ways to cover sensitive topics. Instead of focussing exclusively on regulation and legislation when we discuss media development assistance in these more restricted media environments, it could be beneficial to think about nurturing the alternative journalistic methods which serve the same function as critical coverage. Particularly ‘soft’ human-interest stories and the inclusion of social media as a “news breaker” have proven effective ways of bypassing stern state regulation of press freedom,” explains Emilie Tinne Lehmann-Jacobsen, who has conducted extensive fieldwork among journalists in Vietnam and Singapore.

More and more Vietnamese journalists are discovering that they can work on stories which the general public express concern about on e.g. Facebook. They cannot convey dissatisfaction with the regime, but they can disclose the facts of a story:

“A widely circulated story about a Taiwanese steel plant which led toxins into the ocean, killing tons of fish, is a case in point: Fish mass death is a big deal in a country where so many people depend on fishery, and many Vietnamese were furious that the government initially exonerated the steel plant; they began posting stories on Facebook with the hashtag #ToiChonCa – ‘we choose fish’ – and there were even protests in the streets, which is extremely rare in Vietnam,” says Emilie Tinne Lehmann-Jacobsen and adds:

“The media could not cover the protests themselves, but they could put pressure on the authorities by conveying the facts of the case ‘in order to stop myths from spreading on social media’. Fact-checking thus became an excuse for reporting on a story that the media would otherwise have refrained from covering.”

The government eventually had to initiate another investigation into the causes of the pollution, aided by international experts, and the conclusion was clear: The steel plant was exclusively responsible for the pollution.

Limitations in the freedoms of the press and restrictive media regulation also affect the working conditions of Singaporean journalists. However, journalists in affluent and efficient Singapore do not experience the same amount of conflicts as their colleagues in Vietnam. In Singapore, journalists to a certain extent impose censorship on themselves because they try to comply with a set of very detailed governmental expectations.

“This does not mean that there are no stories worthy of critical attention in Singapore. The problem for the journalists is that current media regulation does not leave much room for government criticism. Journalists are for instance expected to get an official statement from a relevant government department even when the story in question does not fall strictly within the department’s area of responsibility. But human-interest stories have become a way to cover these sensitive topics. Instead of a hard-hitting critical piece, journalists can choose a “softer” human-interest framing where subjects are in focus. This can work as a soft, indirect criticism of governmental decisions that have had an adverse effect on a particular person,” explains Emilie Tinne Lehman-Jacobsen.

Read Emilie Tinne Lehman-Jacobsen's thesis Inside a contested profession: A comparative study of journalism in Singapore and Vietnam.

Emilie Tinne Lehman-Jacobsen has conducted field work in Vietnam and Singapore on four separate occasions between 2014 and 2016.

During the field work, she has interviewed 40 journalists (18 in Singapore and 22 inVietnam) about their work, and she has had informal interviews and conversations with journalists, diplomats, civil society organisations, and local experts.